The start of our summer holiday 2017 saw us leaving home at 9.15 and collecting the caravan from El Vergel and meeting Mike and Sue with their motorhome at the Ondara shopping centre. We left there at about 10am and joined the AP7 north. We stopped for coffee at the service station on the approach to Valencia. 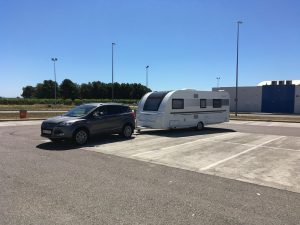 After a break we set off again on the AP7 which was busy with cars and lorries but moving freely. We continued north and then turned off onto the A23 and so the climb up into the centre of Spain began. We were heading for the highest campsite in Spain at 1750 meters above sea level in Bronchales, Aragon. Part way along the A23 we had to stop after passing one of the viaducts as the jockey wheel on the caravan dropped down (note to self don’t let the security guard at the caravan storage put the jockey wheel up). Luckily no damage done. We stopped for lunch at a service area near Teruel.

After lunch we continued along the A23 until the turn off with the A1511. With all the climbing and wind on the trip we had used a lot of fuel and so pulled into the petrol station and put in 46 litres so the economy for 300 km’s wasn’t good. After the fuel stop we continued towards Bronchales through one sleepy village and onto an undulating road that continued to climb. We could see Bronchales in the distance nestled below two tree covered hills. We entered Bronchales and twisted through some narrow roads and followed the signs rather than the sat nav to Camping Las Corralizas. We left the town and went onto a narrow road through the forest for about 3km’s until we arrived at the campsite. Luckily we only passed one motorhome coming the other way and it was on a wider stretch of the road.

The campsite is set between trees with some no marked pitches just areas to park in. We were surprised to find that the temperature had dropped from the 31C at home to only 17C at the campsite so shorts and T shirts were the wrong clothes. We parked up amongst the trees and had a good meal at the campsite restaurant. 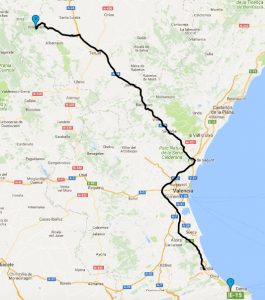 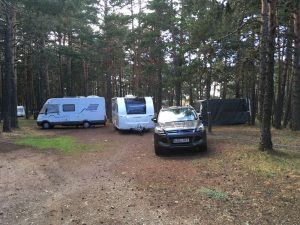 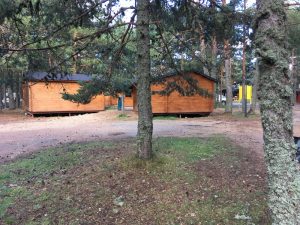