As Mike and Sue had also collected their new Carado T447 motorhome this week, we decided to take a short trip together to make sure everything was working properly and we knew how to work everything. Yesterday I rang Kiko Park in Oliva to book us in but they only had one pitch available so we decided to go to Las Palmeras in Crevillente where Mike and Sue had been before. It was a good job that we did, more on this later.

We loaded the Adria first thing this morning and found that the fridge was not cold even though it had been plugged in to 220v since 10am yesterday.We left home just before 11am and met Mike and Sue at the petrol station at the Ondara shopping centre having found that the Parrot Asteroid radio / sat nav / reversing camera display was not working. It was a good job that I had put the untrustworthy Garmin Camper 760 in the van as I wanted to compare the two. We set off down the motorway towards Alicante and hadn’t gone far before the door to the cupboard above the fridge sprung open. We stopped at the service area at Benidorm for coffee and I tried to ring Caravanas Cruz to let them know that we were stopping on the way to Crevillente to get them to check out the problems. It was a good job we went south rather than north otherwise it would have been a special trip to Elche to get the problems with the van sorted. 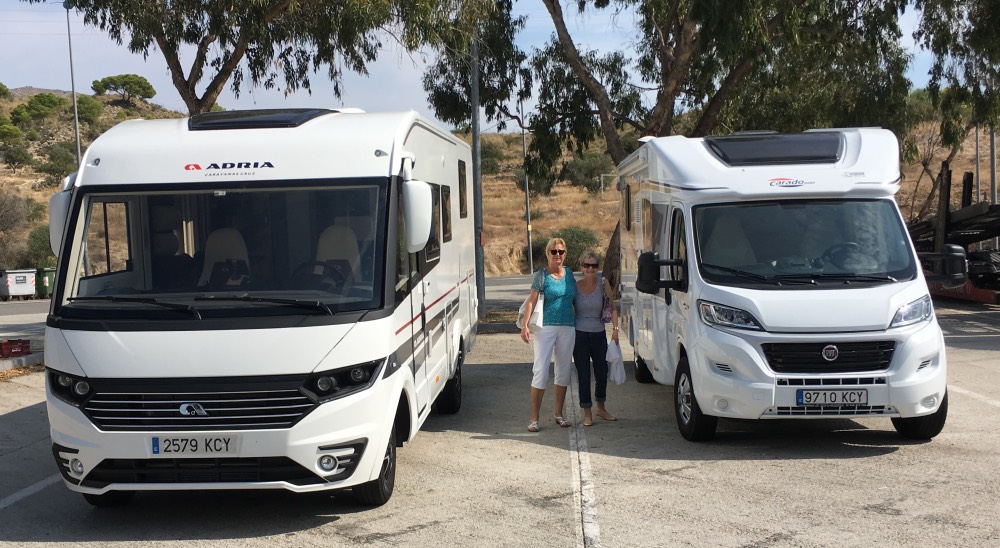 Girls posing with the new vans

After coffee we continued on to Elche and Caravanas Cruz arriving there just before 1pm. They had a quick look at the problems and decided that they would need the motorhome for a day to sort them all out. We have therefore booked it in for service and will drop it off on Saturday on our way home and collect it next week when they have corrected the faults. We continued to Las Palmeras at Crevillente. On arrival we were told to choose a pitch and then let them know in reception later which ones we had chosen. We parked up and connected to electricity and got the ground sheet out and table and chairs and then adjourned to the hotel bar for a boccadillo and cold drink for late lunch.

After lunch we checked in and confirmed our pitches and were charged 30€ for two nights to be paid when we leave, it does help having an ACSI card. Back in the Adria I found that the gas bottle regulator would not connect to the gas bottle and also the Truma hot water / heating system was stuck on gas as the fuel source and would not change to electricity so no hot water. All this little issues are annoying to say the least.

We cracked a bottle of cava to celebrate the new motorhomes. At 8pm we adjourned to the hotel restaurant for dinner and had an excellent menu del dia for 12€ a head and including the extra wine and coffees it ended up costing us 13.50€ a head and we still had 3 half bottles of wine to finish with dinner tomorrow. After dinner we went back to the vans and settled down for the night.