We packed up and left by 9.45am and negotiated our way through the morning traffic in Cordoba. With all the traffic lights and one-way systems, it took us over 15 minutes to reach the A4 motorway. We headed east towards Seville and stopped at the first services to fill up with fuel, €100 poorer we continued on our way and saw some stork’s nests on electricity pylons and a couple of storks roosting on the street lights. The road surface on this section of the A4 was better in some places than the routes from Santa Elena to Cordoba but in some places, it was equally as bad. 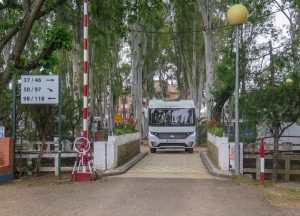 Leaving over the narrow bridge 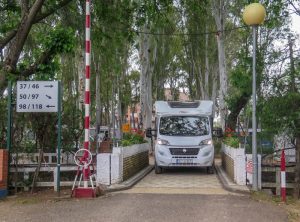 Leaving over the narrow bridge

Alongside the motorway for the first section of the route we were passing through more olive groves and these gave way to open green fields with some solar farm areas. We routed around the Seville ring road which was pretty busy to Dos Hermanas just to the south of the city and on to Camping Villsom, arriving at just before 12noon. The road outside the campsite is being re-routed and was marked as closed but as the campsite was only 50m past the road closed sign I took a chance the road closure was immediately after the campsite entrance. We checked in and the first pitch we were shown was too small and the front half of the van was still in the road. We were then moved to a large pitch opposite which was excellent. 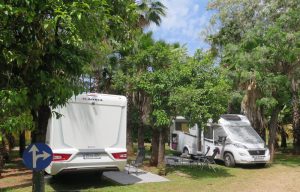 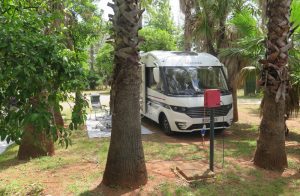 We decided on a quiet day today after all the walking and sightseeing of yesterday. We had lunch under the trees and then Mike and I took a ride on our bikes to the local shops to buy some food for dinner as the campsite restaurant was closed for today. I rang the local caravan repair firm to see if they could come and look at the awning but they don’t have anything to do with Fiamma awnings unfortunately. 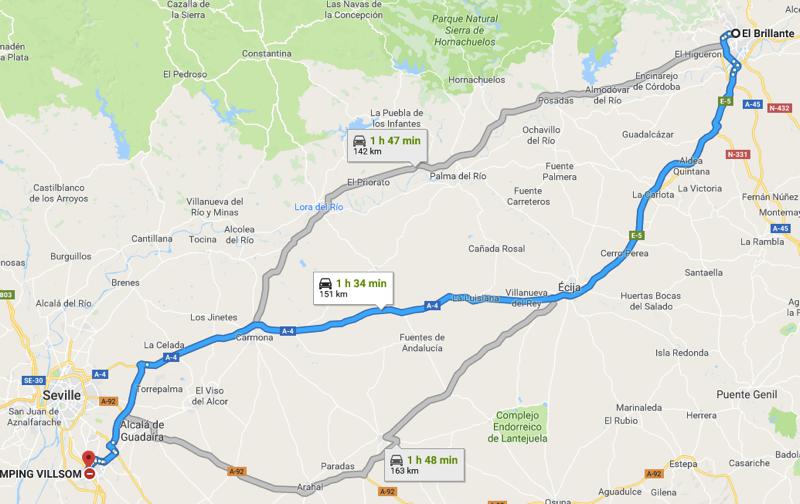