We left Camping Villsom in Dos Hermanas at about 9.15am and headed back towards the A4 and according to the sat nav had to turn back towards Seville and take the first junction onto the SE40 but, unfortunately, for the first time the CoPilot software let us down as the SE40 is still being built at the moment. We continued back to the Seville ring road and then turned off onto the A92 and headed south and east towards Malaga. The road surface was smooth and well maintained and we saw several birds of prey soaring on the thermals looking for prey. The landscape was undulating plains with mountains in the far distance and the road curved around olive groves, fields of corn / wheat and also fields of sunflowers where some of the flower heads had started to appear. Just past Osuna we passed a convoy of tractors towing ‘gypsy style’ caravan trailers heading in the opposite direction, there must have been around 50 of them complete with a Guardia Civil escort. We stopped for coffee at about 10.30 and in the car park of the bar there were another 10 or so tractors with their caravans and an escort of two GC motorcycles. 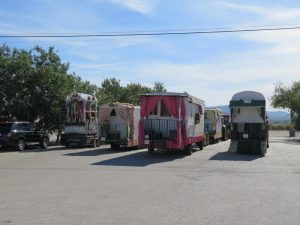 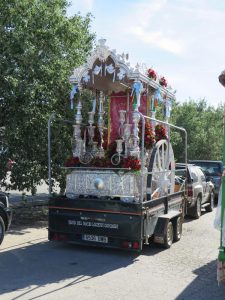 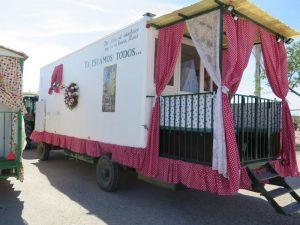 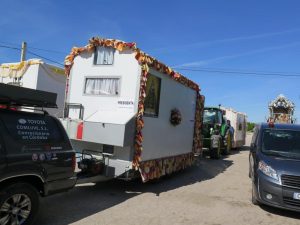 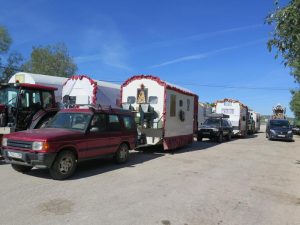 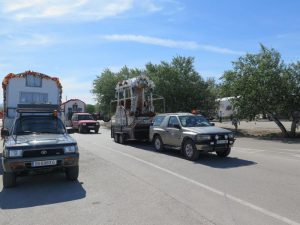 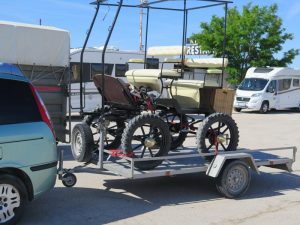 After coffee we rejoined the A92 and just before Antequera we passed another large convoy of tractors towing trailers heading in the same direction as the others. We turned onto the A45 and headed south for Malaga, this road winds along a river dvalley and has several tunnels, sharp bends and steep hills with various speed limits and speed cameras. Going round one sharp bend one of the cupboards came open and the crockery fell out and knocked the kitchen sink tap on which caused a small flood. Ingrid temporarily stowed everything whilst we were on the move, turned off the water and put a tea towel down to soak up the worst of the water. At Malaga we joined the A7 and headed east towards Torre del Mar. The sat nav took us straight to the campsite where we checked in and settled and tidied up the fallen crockery properly. An earth / gravel pitch under the trees close to the beach.