I was busy with a genealogy meeting in the afternoon so we could not set off as early as we would have liked. I got home just after 4pm and picked Ingrid up and we loaded the van and were on our way by 4.20pm. Rather than following either of the sat navs for the route to the campsite I decided to follow the Google Maps route that I printed out for my navigator to read to me. Several people in the online forums recommend Google Maps routes over sat nav’s to this was the reason for this decision. We drove to the AP7 at Ondara and joined the motorway and had an uneventful journey all the way down to Alicante, the route kept us on the AP7 past Alicante. This section of the motorway was subject to some gusty crosswinds which were noticeable in the motorhome. We left the AP7 where it joined the A7 south of Alicante, the road surface on this section of road was poor and necessitated a speed reduction. We continued past the AP7 near Crevillente as suggested by Google Maps and joined the CV904 south, this road ran parallel to the AP7 all the way to Catral where we turned off into the entrance to Marjal Camping followed by a Guardia Civil car, luckily I hadn’t done anything wrong so no issues with them. We checked in at reception at 5.50pm and initially they put us on pitch B079 which was a long way from Mike & Sue and Peter & Mary. We changed to B003 which was much closer to them. We set up the bare minimum and then decided to eat in the restaurant. Unfortunately it was closed and so we had to eat in the bar and had an indifferent meal. 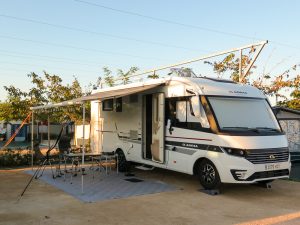 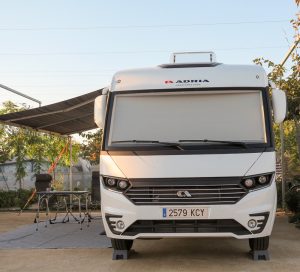 We completed setting up the van, Ingrid and Sue went off for coffee in the bar after lunch we met up for a drink with some of the MCC as we will be joining them on a rally in November to see if we want to join the group. During the late afternoon and early evening the mainly Spanish owners of the permanent caravans started to arrive and the site became noticeably noisier and busier with this influx of people. We had a nice barbecue and then went and joined some of the MCC members for coffee on the terrace after their evening meal in the restaurant which was open as it was Friday evening.

We were going to take a taxi into Catral and have lunch there but unfortunately Ingrid wasn’t feeling great and so we didn’t bother. We explored the supermarket and bought a few bits including a long TV lead as there was some UK channels available free of charge by plugging a lead into the connector on the pitch, they weren’t expensive and so I bought one. We then joined Mike and Peter & Mary for coffee on the terrace. We took a short walk around the terrace area and took some photos of the many carved wooden statues and water features around the site. 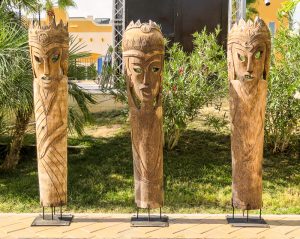 Some of the carvings 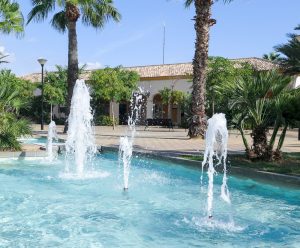 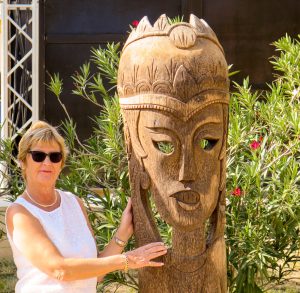 We decided that we would try the restaurant for dinner as we had not made it into Catral earlier, only to find that it was closed on a Saturday night for a private function. What the management were thinking of allowing that to happen I don’t know. So we had to settle for another meal from the bar which was even worse than on Thursday night.

We had a lazy morning and then went to the terrace bar for a coffee. We said goodbye to some of the MCC members who were heading home. We then explored the car boot sale in the car park, we didn’t buy anything as it was mainly pretty tatty. We needed a bit more water in the motorhome so as usual I used a hose and put the nozzle as usual in the filler tube. Unfortunately, the quick release hose nozzle became detached and went down the filler tube and blocked it. I then spent the next 45 minutes taking the cupboard underneath the bed apart to get at the filler tube and remove the hose from it. I was successful but found how well put together the Adria is, it all went back together without issue. After a late barbecue lunch we had a quiet afternoon reading. During the course of the afternoon the site started to quieten down as the weekend visitors started to head home and by about 7pm the site was almost dead. As dusk started to fall we went for a walk around the campsite to see what we had missed. The top half of the site had larger pitches and there were a lot of very large motorhomes in this area including this one drawn by an artic drawing unit 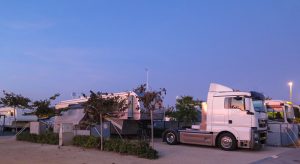 This maybe one for George and Maria in the UK. We found the second swimming pool at the far side of the site which was closed but looked like it was a tropical beach with tiki huts and palm trees. We went back to the van and settled for the evening and watched TV and read. 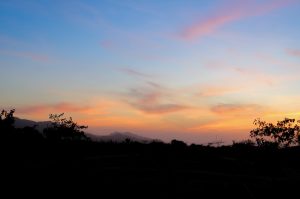 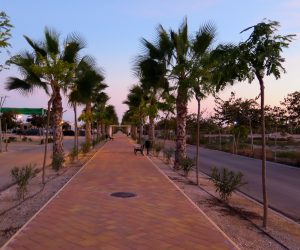 Walkway past the pitches 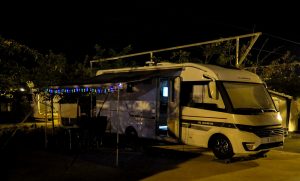 Whilst packing up on Monday morning I heard an unusual noise and looked up and saw this, they had just taken off from the campsite car park. 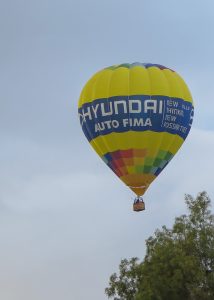 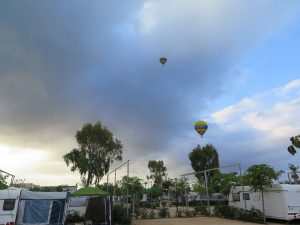 As there was virtually no wind they drifted around the locality for some time. We set off home at about 11.15am after a coffee in the campsite terrace bar. We headed up the CV904 again rather than the motorway and then onto the A7 for a short distance and then turned off onto the N340 to head for Caravanas Cruz. We found that they had a 10% sale on and we got them to exchange the broken awning strap as we had only used them twice before one broke. I also bought a water cap adapter to allow me to connect the hose permanently to the van when on site so that I have no more problems with the nozzle going down the filler tube. We left Cruz and rejoined the A7 and then onto the AP7 to Ondara and then home in time for late lunch.

A nice few days away but the campsite was large (over 1200 pitches) and impersonal with poor food in the bar and a closed restaurant on a Saturday night so it is one we are unlikely to visit again.