We decided to have a bit of a lie in and a lazy morning as we were still aching from all the walking of yesterday but Mike and Sue wanted to do some more sightseeing and so they caught an early bus into Seville. We took a later bus and agreed to meet them at the restaurant for lunch at 3pm. We tried to find a cab to take us from the bus stop to the restaurant but every one that we saw already had fares and so we had to walk, we still arrived on time though. The girls had chosen the restaurant, it was an excellent choice, we all had something different but all courses were excellent. 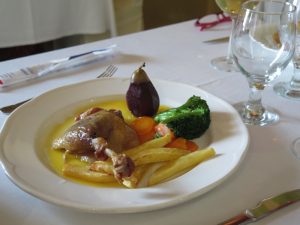 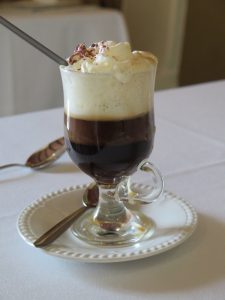 Ingrid’s desert of an Irish coffee.

After a lazy late lunch we had a short walk around the area and had a couple of afternoon liquid refreshments whilst we waited for the Flamenco show to start. We returned to Casa de la Guitarra just before 7.30pm for the show. It is a small intimate location for about 60 or so visitors with a small stage for a guitarist, singer and dancer. Due to the lighting and the inability to use flash the photos all have a red caste but give some impression of the show. After the show we took a slow walk back to the bus stop and took the last bus of the day back to the campsite. Again the bus dropped us off right outside the campsite even though it took the long route back.