We were up early and finished packing everything away and left the campsite at about 9am. We followed the sat nav route out through the town but at a complicated junction with a pedestrian crossing and trees hiding road signs so we went around a section of the town for a second time before turning onto the correct road to the motorway. At the junction with the motorway we went into the Eroski shopping complex and filled up with cheap fuel. This was another circle around one way roads to get back to the motorway junction where we joined the A7 coastal motorway. We ran along the coast for many miles with the blue sea to the right and the mountains to the left. The road was undulating and had tunnels and was in good repair. As we got closer to Almeria city the poly tunnels started, they are a real blot on the landscape extending from the coast to the mountains for mile after mile. The road surface got quite rough once we were in Almeria Province as they don’t seem to maintain the road surface as well as Malaga Province. There was a severe shortage of service areas along this section, about 11.15 we saw the sign for a service area just off the motorway and so we stopped for coffee. There was no room in the car park for two motorhomes and so we stopped on a gravel area opposite next to a JCB. There were two bars to choose from and so we chose the one that the Policia Local were using as we suspected that it would be the better of the two, and it was.

We rejoined the motorway and continued our journey home. We stopped at Lorca at about 1.30 for lunch, the road too and from the motorway junction was very busy with a complicated roundabout junction. We found a hotel with a cafeteria where we had a bocadillo for lunch. After lunch it took us a while to negotiate our way out of the town and back onto the motorway. Around Murcia the traffic got very busy and we ended up stopping in nose to tail traffic which is unusual for Spain. We continued on the A7 and again as we skirted Alicante the road was pretty busy. As we were part way through the long San Joan tunnel we were passed by a Guardia Civil Trafico car on ‘blues & two’s and he stopped on the hard shoulder just outside the tunnel where there was a car on fire, although it was nearly extinguished by this time. The rest of the journey to Ondara was uneventful and we pulled into our parking spot at about 4.45pm. A long day and a 550km+ journey without incident for us. 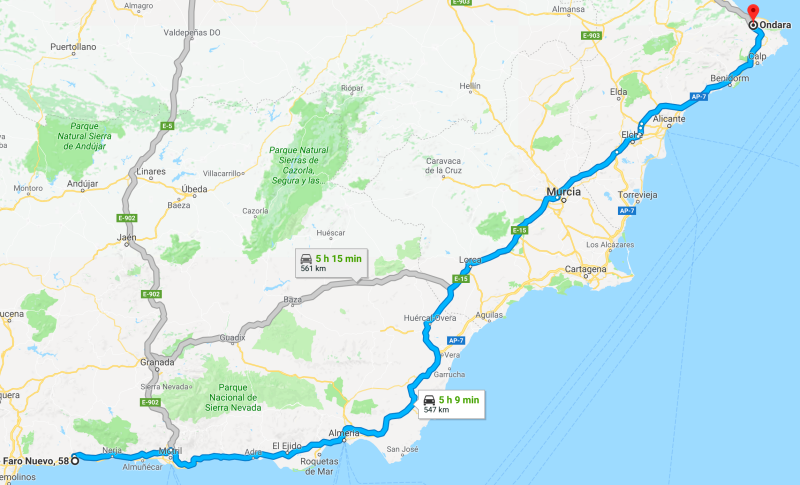