We decided that we would change our original plan and leave home early and go direct to Camping Entrerobles and stay for two nights instead of just one. As a result we left home at 8.30am and joined the AP7 and headed towards Valencia around Valencia and on to the A23 in the direction of Teruel. We stopped for coffee at a service area about 30km from Teruel, unfortunately, as it was the first services for some while it was full. Around 30 bikers had stopped for breakfast along with a large number of cars and a few trucks. After 15 minutes of waiting and still no sign of being served we left and continued about 10km further to the next services off the motorway. We were lucky here in that we were served virtually straight away but shortly after we were served the place filled up. 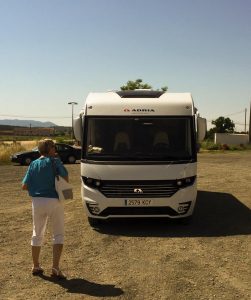 We re-joined the A23 and continued past Teruel and on towards Zaragoza and then turned on to the N234. This was a single carriageway road that was very quiet with little traffic in either direction. We passed through 3 villages all within about 15km and each of them had an unusual church with an ornate tiled bell tower with a spire on the top. Later villages had conventional bell towers. We saw a bar beside the road some distance further on with parking suitable for the motorhome and so we stopped for lunch. We ordered half a chicken with chips and salad for €6.50 and neither of us could finish it all, along with a glass of wine and 2 claras it was an expensive €16.50. Whilst we were there a band started playing and marching from the village towards the bar and they entered the bar and continued playing. They were followed by lots of people in their Sunday finery and we found that it was the villages local fiesta and so again we timed arriving and leaving just right. 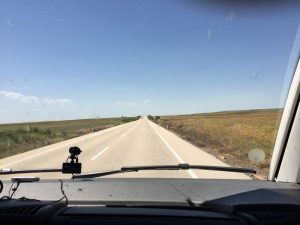 We continued along the N234 in the direction of Soria, the landscape changed again and the road became arrow straight but undulating as we rolled across the Spanish plains. Some of the fields were a mass of red poppies, others had olive trees and some were fields of cereal crops. We were both getting bored of the journey by this time with little changing and the straight road. On the outskirts of Soria we filled up with diesel at some 10c a litre cheaper than at home. We followed the N111 in the direction of Logorno on the same route as last year towards the campsite. Unlike last year there were very few storks on the high buildings and even fewer nests.

We arrived at Camping Entrerobles at 4pm, checked in and were told to set up anywhere just like before. We drove around the site and chose a pitch close to where we parked before. Quickly set up and settled down in the 32-degree sunshine with a cold beer. 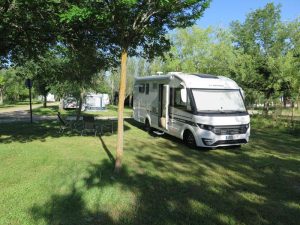 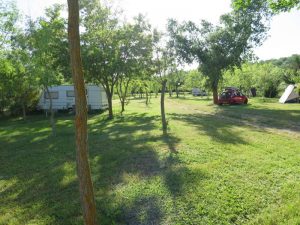 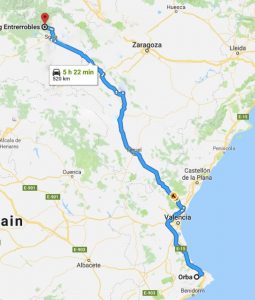