Looking at the preferred route of the satnav it wanted us to go to Logrono and then by motorway to Bilbao and along the coastal motorway to Comillas. It did offer a couple of alternative routes and on checking on Google maps we selected an alternative with a couple of variations for a picturesque trip. As a result, we left Entrerobles at 9.20 and as we were ready to leave so early we had to open the gates to leave the campsite. We went down the new road and joined the SO820 heading west through the forest and past the lake that we visited last year. We drove through the various villages with their red sandstone houses, there were a few more storks on their nests but still not as many as in 2017. The road number changes to the CL117 as we changed provinces and we continued through forest and small villages, many of the villages had timber yards for processing the wood cut from the forests. We then joined the N234 and headed towards Burgos and then we joined the A1 motorway and we stopped at the first services for coffee.

We re-joined the A1 and continued to Burgos and then around the ring road and on to the N627. All the roads on this trip were light with traffic and what there was was moving comfortably at the 90 or 100kmh speed limit and so that was fine for us, this section of the route was through some open fields and also past some overhanging rocks. We then joined the A67 heading north towards the coast. Some of the mountains in the distance still had snow on them in places just like those in Soria. We left the motorway at Torrelavega to refuel at Carrefour, had some lunch and then did some food shopping. There was a 2.1m height restriction on the Carrefour car park and so we had to park in the street outside.

After lunch and shopping we rejoined the A67 and then onto the A8 coastal motorway. The satnav took us off at the correct junction, not like last year, and we continued to the campsite arriving at 2.45pm. The first pitch that we went onto did not have a grey waste disposal point and so we moved to a pitch opposite where we were in 2017. During the evening there was thunder and lightning and later some rain. 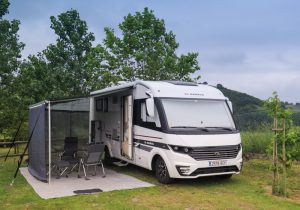 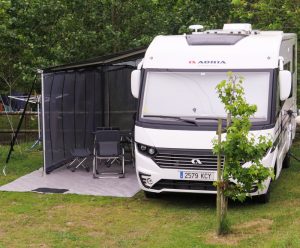 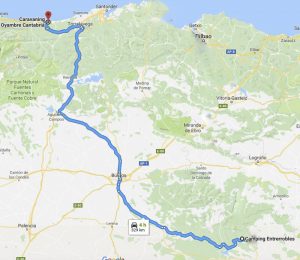