As we went to bed last night there was thunder and lightning which then stopped and a little later there was some light rain. This morning we woke to a brilliant sunrise and clear skies but found that the light rain had in fact been much heavier after we were asleep and I had not put enough fall on the awning and so there was a puddle in the roof canvas. I drained it all off, it and the windblockers dried fairly quickly in the sunshine. Looking at the forecast we are due more rain later today and so once the windblockers were dry we folded them and put them away and I put a lot more fall on the awning as we still needed it for protection from the sun.

I got the folding bike out to go into town for some milk and cold meats for today. I found that the road to the town was more uphill than I realised when we had walked it before. After doing the shopping I coasted 3/4 of the way back without pedalling. After lunch I watched the grand prix qualifying and saw the England result on the BBC website. Who would have expected England to make the semi finals. About 6pm the thunder started again. There was some small amount of rain during the evening and there was an unusual sunset. 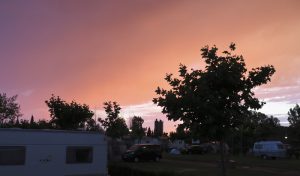