During our recent holiday around Spain we did not visit all the places that we had planned due to the poor weather on the north coast which is unusual for this time of year. However, we had a great time away for an extended period in our Adria Sonic, we covered a total of 2163 kilometres and this consumed 255 litres of diesel which cost €308 and we stayed in 6 different campsites for a cost of €309.

A brief review of our campsites in order: 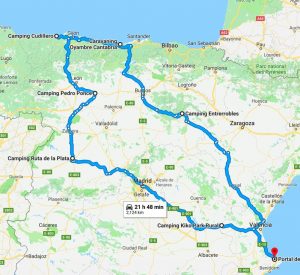