Up early this morning and then after a quick breakfast prepared the caravan and car for the trip leaving Las Corralizas at just after 9am. The campsite was very busy with lots of people having arrived for the weekend and the Sunday sports event. There were several ‘road lice’ around the campsite and they had abandoned their very expensive mountain bikes everywhere. I had to move 3 before we could manoeuvre out of the exit onto the forest road back to Bronchales. With the sports event on several roads were closed off and as we entered the centre of the village we found that the weekly market was setting up and it was tight in places getting past the stall holders and their vans as they were busy setting up.

We left Bronchales and followed the sat nav directions. There was a petrol station shown on the N211 43 kms from Broncales and we decided to stop there for Mike to fill up and for me to top off the tank. At the junction with the N211 we needed to turn left but the petrol station was 300m to the right and so we turned right and found that the petrol station had closed down. We were now on a major trunk road with no obvious places to turn around. As a result, we went about 6km in the wrong direction until there was a suitable junction where we could turn around. Back on route we continued to Molinas de Aragon where there was an open petrol station and we filled up. The castle and walls in Molinas were large and impressive. Opposite the petrol station was a bar and so we decided to stop for coffee and some tostados. Unfortunately, we weren’t’ the only ones with this idea and the bar was heaving. Fed and watered we continued our journey.

After some 55km we joined the A15 motorway, Mike spotted a total of 7 deer grazing in several different places in the fields at the side of the motorway along this part of our route. We didn’t spot any as we were lower down and did not have such a panoramic view of the scenery. We did see a lot of birds of prey hovering near the roads and over the fields. We changed motorways and headed for Soria the motorway finished at this point and we were back on to local roads. The route so far had been undulating and for most of the journey we were over 1000m and there were 2 or 3 very long climbs that caused the speed to drop.

We left Soria and headed for the campsite in Valdeavellano de Tera. We turned off the N111 and continued through the trees and scrub until we came to Valdeavellano de Tera. On the approach to the village we spotted a large storks nest on top of the church tower with two storks standing beside it. We continued through the village which was a bit tight in places until we found the Camping Entrerrobles campsite. We checked in and were told to choose our pitches as they weren’t full wherever we liked. We parked up and sat in the sun with a beer and sandwich for lunch. Not quite as high as Bronchales only 1150m above sea level here. An excellent meal tasting some of the different wild mushrooms from this area. 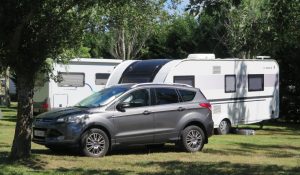 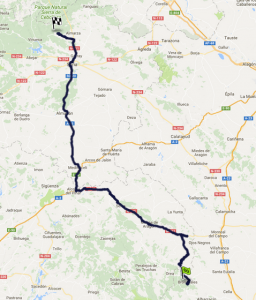