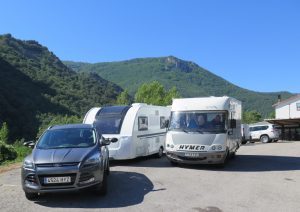 After paying our bill at Camping Entrerrobles we left at 10am and followed the sat nav towards Logrono. This was a fairly slow road in places even though it was the N111 as it wound through the mountains. We stopped for coffee at a nice roadside bar.

After coffee we continued on our journey and once we reached Logrono we joined the A12 motorway and continued to Pamplona. The scenery and views along the whole of today’s route was spectacular. After Pamplona we joined the A15 motorway towards San Sebastian and were climbing and descending the western end of the Pyrenees. We stopped at a service area for lunch, a good job we did, more about this later. It was a very expensive for Spain roll and drink.

After lunch we continued towards San Sebastian eventually leaving the motorway and moving onto local roads. For some reason the sat nav routed us to the west of San Sebastian and then into a small village, we followed the directions and ended up at a no entry sign in the village of Usurbil. I had to reverse the caravan down a little side road to turn around and head back to the main road. Looking at the map later for some reason the sat nav wanted to take us down some very small rural roads (note to self don’t trust the sat nav even though it is supposed to be one designed for caravans). We rejoined the main road and I decided to head a bit further west and to see where the sat nav would re-route us.

The sat nav eventually turned us onto the coast road back towards the campsite. This road was pretty narrow in places with a couple of hairpin bends and we met several other vehicles coming the other way but we always managed to pass safely. Eventually there were signs indicating that we were heading in the correct direction to the campsite. We pulled into the campsite and pulled up to the barrier and a security guard told us we could not enter and had to park in the car park opposite and check in and then we could bring the caravan on site. The entry and the roundabout were too tight for me to turn round and another worker for the site told me to ignore the security guard and to leave the car and caravan where they were and check in which we did. The map and instructions on where our pitches were was not very clear and I missed the turning into our pitch and ended up at a no entry sign on a steep downhill road. It was too steep to reverse luckily the same worker told me to ignore the sign and to go to the bottom of the hill and turn round and come back up the hill which I did.

I turned in to the road with our pitch on. Mike had already parked his motor home in the furthest of the two pitches to make my life easier. This did not work out. The pitches were very small and with a motor home parked close to the roadside edge of his pitch I could not manoeuvre the caravan onto the pitch. Mike offered to swap pitches which we did but even still I had to park the van across the pitch as it was less than 7m deep and 8.4m wide and with an 8m long caravan parking width wise was the only option. This left no room for the car luckily I could park it next to Mikes motor home and he could still put his awning out.

We chilled out with a few beers and glasses of wine and then we found that unfortunately the cupboard door in the bathroom had come open and the liquid soap container had come open and liquid soap was all over the bathroom and this took some cleaning up. After an evening meal of cold left over barbecue and some more wine and beer we retired early for the night. A bit of a stressful day but everything worked out OK in the end with no damage.

The devious sat nav route to the campsite