The morning was grey and overcast and so we decided to do some bits around the caravan. It was looking a bit grubby after the trip yesterday with the rain and the muck on the motorway. It looks a bit cleaner that when we arrived.

We decided to explore the area and have some lunch out. After exploring the area between the campsite and San Vicente de la Barquera on the way down the coast we found that the sat nav had certainly taken us a long way round. We drove over the bridge and into the town and parked in an underground car park. We had a walk around the town that was very busy with restaurants and some shops were open. We bought some nice pastries in a patisserie and a few bits in a Chinese shop and then found a restaurant and had a nice reasonably priced lunch. We then drove a much quicker way back to the campsite and that is certainly the route we should have used yesterday.

The bridge to San Vicente

Church on a hill in San Vicente 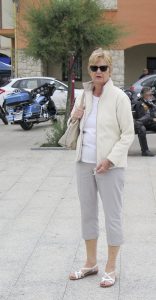 Ingrid with a Harley