Our last day at Camping Igueldo so we decided to take it easy before tomorrows drive and to start getting ready to leave in the morning. Ingrid did some washing and I pottered about. We decided to have a cooked meal at lunchtime and so I would barbecue the chicken and mushrooms we had bought earlier in the week. Even though the chicken was in date it still didn’t smell good so we decided not to risk it and so it went in the bin. The mushrooms however were fine. Rather than just barbecue these Ingrid decided to do them in a pan on the hob. We had never used the small ring before and it was difficult to light and when it did it flared up and singed the hairs on my arm. This ring is obviously faulty as the others are all OK so back under warranty when we get home.

After lunch I decided to do a bit more preparation for tomorrow’s departure. I should have known better after singeing my arm, I stood up and walked into the partially open caravan window. The perspex edge of the window is quite thin and sharp and I now have a 2 inch gash on my forehead that bled profusely. I am now waiting for the third thing to happen.

Whilst having lunch we had a small visitor on the rock wall behind us and he kept still long enough for me to take a photo. Ingrid had spotted him hiding in a crevasse but he came out to have his photo taken.

The rest of the afternoon was spent reading in a chair hoping that no more injuries befall me. 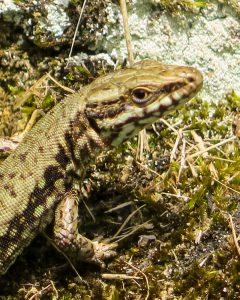 Lizard on the rock