We were up early and found the car and caravan covered in dew as it was cold overnight. We packed up and then following advice from neighbours who had been on site for 7 weeks I drove the caravan out of the pitch along the gravel road and down the hump to the main road using the mover rather than it hitched to the caravan. Even doing it this way I had less than 2 inches of ground clearance and the front end of the caravan came up at one stage. I parked the caravan on the hill and reversed the car onto it and we drove out of Caravanning Oyambe at 9.15am.

We followed the re-programmed sat nav and joined the A8 motorway without issue. We continued towards Santander and then turned off onto the A67 south in the direction of Valladolid. This section of the route had lots of viaduct bridges and tunnels. We then turned off onto the A231 towards Burgos. Google maps had suggested turning off the A67 much early and going to Burgos on the A74, that route would probably have been shorter but we decided to trust the Garmin. However, the last 30kms or so of the A67 were decidedly uncomfortable with the road surface heavily rippled and caused us to slow down. Maybe we should have followed the Google maps route.

We stopped for coffee and to refuel on the A231 for about half an hour, just after we left the coffee stop we saw a flock of 20-30 birds of prey hovering over one spot alongside the motorway. There were also large fields of sunflowers along this section of the route along with an incredible gold painted bridge followed by a silver painted on. We followed the ring road around Burgos and joined the E5/A1 heading south towards Madrid. This section of the A1 was very undulating with some very steep climbs, at one stage we were down to 60kph as the climb was that steep. Looking later we had reached over 1500 meters. We stopped at a motorway service area for lunch for about 30 minutes or so and noticed the increase in temperature it was now 28 degrees having left Oyambe at 16 degrees.

After lunch, we re-joined the E5/A1 and continued south and turned off onto the M604 towards the campsite. Following the signs and the sat nav we turned off onto a campo road that was poorly maintained and crept up the hill towards the campsite arriving at 3.15pm and 33 degrees. We checked in after the receptionist eventually found us in their reservation system and it looks like we had the last grass pitch, which are the large ones, available. I think that we are the only Brits on the site, all the other occupants seem to be Spanish. The site itself is on the borders of a national park and is some 1100 meters above sea level.. The receptionist said that they were full but the site would quieten down tomorrow evening when the weekend visitors returned home. We may look to move pitches as we are so far from reception there is no Wi-Fi coverage here.

We are a long walk from the only toilet block that is quite small so hopefully we won’t need to queue. We went for a pre-dinner drink on the terrace outside the restaurant and admired the views and the cooling spray from the mister all around the terrace area, it certainly needed it. We reserved a table for dinner and both had an excellent meal but it wasn’t as cheap as we are used to but as it was so good we didn’t mind. 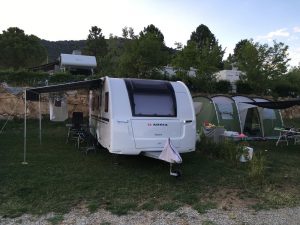 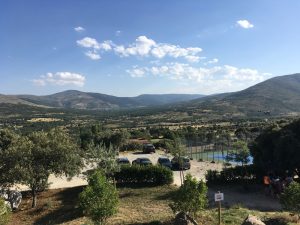 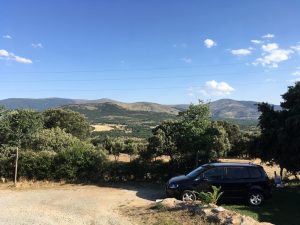