We loaded up and set off at about 9.15 this morning and it was already 28 degrees. Ran down to Ondara and then joined the AP7 heading north for Valencia. The motorway was surprisingly busy and a majority of the vehicles seemed to be French registered cars heading north. We had an uneventful journey on the motorway up to the toll booths near Alzira and typically I chose the wrong lane and got stuck behind a French driver who took ages to find his wallet and then wanted a receipt then we just breezed through with the toll tag. We left the AP7 and joined the A23 heading for Teruel and Zaragoza. The A23 had some lovely smooth sections and then some very rutted sections needless to say the 3 usual cupboard doors came open, luckily the drawer stayed close so it looks like I may have fixed that. We stopped for coffee at the same service area we first stopped at in our Spanish trip in June, this time it was busy but luckily not as bad as last time and we actually managed to get served this time.

After coffee we re-joined the A23 and continued north towards Zaragoza. Along the A23 there were a mixture of French and Spanish cars all heading in the same direction as us. We saw 3 Adria motorhomes going the other way. We also saw more caravans than motorhomes in both direction on this section of the journey. We stopped at the 202 services for lunch and just had a snack as neither of us could face a full meal. I bought a litre of very expensive 0-30 synthetic oil for the motorhome at the garage by the restaurant as the new Ducato engines have an appetite for oil. It was a good job that I did as the dashboard warning came up to check the oil, I had been unable to buy any from the auto recambios in Ondara last week.

We rejoined the A23 and continued to Zaragoza and arrived at the municipal campsite at 3pm. They had our reservation and so that was good and we were allocated a pitch right opposite the toilet block. Free wifi but quite expensive at over €30 for one night. It was 38 degrees when we arrived and so the air conditioning is getting a work out. 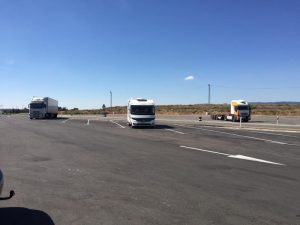 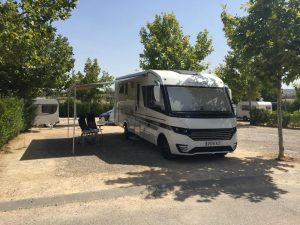 Parked up for the night 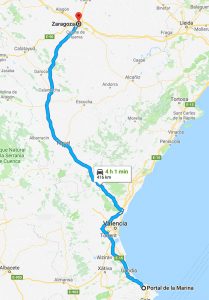