We had a lazy morning and slowly got everything packed away between the showers and left at about 10.45 back to the outskirts of Wallingford and then followed the signs towards Oxford and the A40. The Oxford ring road was very slow with nose to tail traffic not helped by the heavy rain that was now falling. We followed the A40 into the outskirts of Cheltenham and then followed it out towards Gloucester. We decided to stop at the Asda store that was near the campsite but we couldn’t find it as it was poorly signposted. We found B&Q but that was the best we could do. We made our way to the campsite and checked in at 12.30, it was still raining heavily and made our way to our pitch, shortly after we parked up it stopped raining. We took the respite of the rain to take a chance and gave the van a quick wash down as it was filthy with all the rain.

We set up and had some lunch. After lunch it was decided that we would do some washing so we set what we thought was the washing machine but it turned out, when we went back after an hour to take the washing out, it was the tumble drier, oops. We then put the washing in the machine and decided to walk to Asda having been told where exactly it was by the campsite staff. We walked there in just over 10 minutes and did some food shopping and then walked back towing the trolley. After a beer we took the washing from the machine and put it into the drier. For dinner we used the BBQ for the first time this holiday.

This campsite is probably the best one we have ever stayed at. Our pitch has a concrete van parking area, alongside a gravel area for our awning followed by a grass area before the next van. The pitch has water, electric and grey waste and fast free wifi. The central wash block is modern and heated with piped music. There are even plugs in the sinks and even plate drainers in the pot washing area. With bus stops right outside the gate for Gloucester or Cheltenham and with the A40 and M5 close by it couldn’t be more conveniently located. 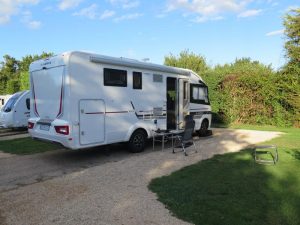 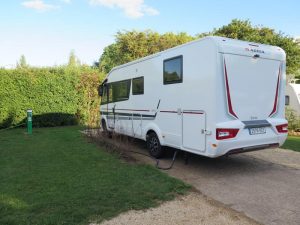 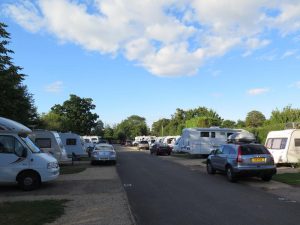 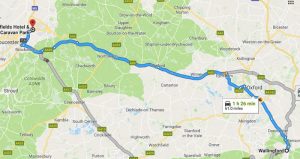