We were up early and were packed up and ready to leave just after 8am, just as we left Le Vieux Moulin it started to rain. During the course of the morning it rained off and on, sometimes heavy and sometimes light mizzle. We followed the sat nav down the local roads we had approached the campsite on and over the narrow bridge where we met a 38-tonne artic coming the other way, luckily there was just enough room before the bridge for us to pass each other safely. We then drove around the outskirts of Le Mans and on the D roads in the direction of Poitiers. At ten past nine on one of these D roads a deer ambled across the road just in front of us, the dash cam caught it passing but unfortunately, I didn’t lock the video and it was overwritten later in our journey so we have no video evidence of it. We stopped at a Les Routiers stop for coffee that was very expensive and they didn’t have any croissants or anything light for a mid-morning snack. We went through several picturesque villages and at Poitiers we joined the A10 and this allowed us to eat up the kilometres.

At about 1pm it finally stopped raining and the road started to dry out and the temperature climbed for 18 degreed to 24 degrees but the sky was still grey and cloudy. We stopped for lunch at a service area on the A10 but Ingrid didn’t fancy what they had on offer and so we only had a short stop. By 2.30 as we approached Bordeaux the grey sky had started to clear and there were patches of blue and the temperature rose again. The traffic around Bordeaux was slow but it kept moving and we turned on to the A63 heading towards San Sebastian. At 3pm we stopped at a service area for an afternoon coffee and snack and looked at the various apps to find a campsite for the night. We found one in Salles some 25km from where we were. By the time we re-joined the motorway the traffic in the direction of Bordeaux was virtually stationary and it was like this for some 20 km or so. We turned off the A63 and followed the sat nav into Salles and to the campsite (Camping Park du Val de L’Eyre) where we arrived just after 4pm and it was 33 degrees! It took some 30 minutes or so to get checked in as the laid-back owner was chatting to some other customers and with a bit of Franglais between us I eventually got checked in. We parked up on a large grass pitch and plugged in and settled with a cold one. 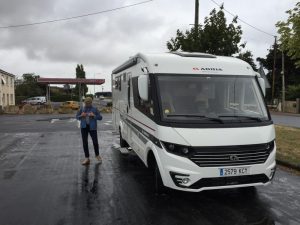 Stopped for coffee in the rain 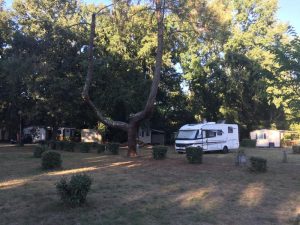 At the campsite in Salles 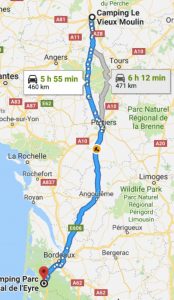