We got up this morning to bright sunshine and we finished packing up and just as we left at 9.45am it started to spit with rain. We routed back around the northern Carlisle ring road and back on to the M6 at junction 44 heading south back towards junction 40 and t times the rain was quite heavy. We turned off at junction 40 to head across the Yorkshire moors towards the A1M on the A66. This road was a mixture of single carriageway and dual carriageway, it was heavy with traffic particularly lorries but it kept moving at the speed limit. At the junction with the A1M at Scotch Corner there was a service area where we stopped for coffee.

After coffee we joined the A1M heading south and again it was fairly heavy with traffic but flowed well. There were a couple of sections of reduced width with 50mph speed limit. We continued on towards the junction with the A59 and then on to the A59 and in to York. The route in to York was exactly the same as we took when we visited here a couple of years ago and some of the route was a bit narrow at times but without issue and on to Manor Farm Campsite. We checked in and parked up on a nice pitch in a large field with a few other caravans and motorhomes. I have an appointment with a local dentist tomorrow morning first thing to sort out my toothache. We had a quiet afternoon reading and relaxing. Today we saw more motorhomes on the road than we had at any other time so far in the UK and less caravans. 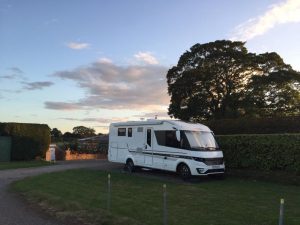 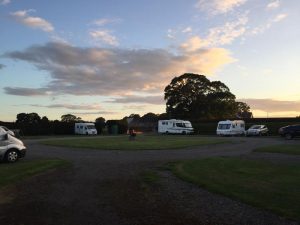 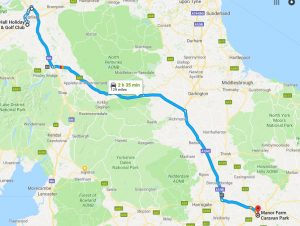