We finished packing up and left Capesthorne Hall just after 9.30am. We turned left out of the gates and followed the sat nav and the road signs to the M6 but we stopped and fuelled up at the first petrol station that we came to. We joined the M6 and started heading north and surprisingly the motorway was busy but flowing very freely. There were a couple of sections of roadworks with 50mph speed limits but they flowed well. The traffic started to thin out once we were past the Liverpool and Manchester junctions. There was light rain and heavy rain along this section of the motorway, at times the wipers were on full speed and we slowed to around 50mph to ensure we had suitable visibility. We had a long stop for coffee at Lancaster services parking in the lorry park with lorries and other motorhomes and caravans. We rejoined the M6 and continued north, we saw and passed a lot of caravans and very few motorhomes on this journey. We routed to the north of Carlisle and followed the ring road around before heading south again back towards Dalston and we turned into the campsite. Our pitch was next to Dave who had already arrived.

After lunch we compared the differences between our two Adria Sonic SC’s and there were a lot more than either of us expected. Dave adjusted a couple of my touch latch door catches and hopefully they may have fixed the problems. My mum arrived during the afternoon and we then went next door to the hotel for dinner, mum’s and Ingrid’s was excellent mine a lot less so. After dinner mum went home and we stayed up with Dave and family for a few drinks. 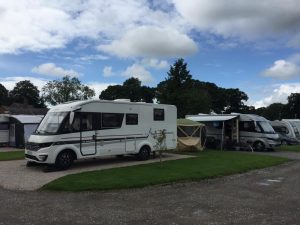 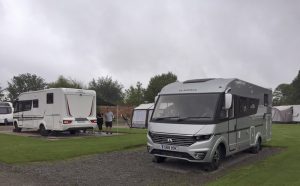 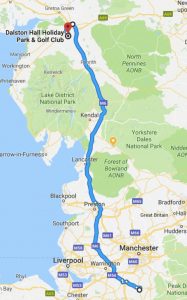