After a quiet night at Beau Rivage we got up this morning to some dew on the van which was a pleasant surprise. We packed up and dropped our grey waste and left at 9.30. After yesterday’s windy roads we decided to take things a bit easier today and to take the motorway where possible even though it meant paying the tolls. Even still we had a long drive from Navarrenx to the motorway. We went through the village and then on to the D947. The road wound through some small narrow villages and then through open farm land with lots of fields full of sweet corn and others full of sunflowers. The French certainly seem to like their roundabouts. If we went through 10 today we went through at least 50. There was one narrow section through a town with bollards in the centre and I ended up scraping the rear tyre against the kerb, luckily there was no damage. At one roundabout there was a red car right in my blind spot in the roundabout but luckily Ingrid had seen it and we didn’t have a coming together. We eventually joined the A63 motorway heading north as we were passing an HGV it flicked a stone up which has put a chip in the windscreen. We decided to stop for coffee and pulled in to a rest area to find it was only a parking one.

We stopped at the next service area for a coffee and a croissant, very expensive in comparison to Spanish motorway service areas. We re-joined the A63 heading north towards Bordeaux and I comments that we hadn’t seen many Adria motorhomes going the other way and then the next one was an Adria, typical. We saw lots of motorhomes on today’s journey and many of them were Adria’s. There was one tolls section on the motorway and we pulled in to the toll booth and it said 15.50€ but it should have been less so I called up on the intercom as mentioned on Facebook and said ‘Camping Car’ and the toll was promptly reduced to 5.50€.

When we were about 25km from Bordeaux we suddenly stopped and then we crawled for at least 20km until we came across the scene of an accident on the opposite carriageway, the holdup was caused by the rubber-neckers. We continued to the outskirts of Bordeaux and then on to the E7 ring road, the queue to the accident was at least 20km long in the opposite direction. We turned off the A63 and on to the N10 in the direction of Angouleme. This was mainly a 2 lane 110kmh motorway. We stopped for a snack for lunch and then pulled in to the campsite in Angouleme at just before 3pm and checked in to the overnight ire parking that was fully serviced for only 14€ a night. It was 38 degrees when we arrived with clear blue skies and not a breath of wind so it was scorching. There was also an Adria Sonic 600 parked on the site, the first we have seen on a site for quite a while. 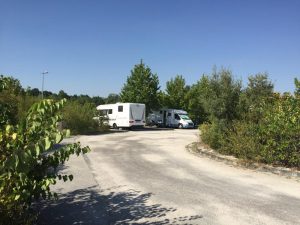 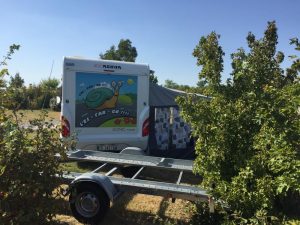 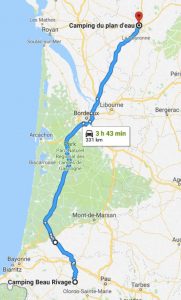